Only after a modern bioenergetic screening, analysing potential root causes of a disease, we are suggesting methods to improve health.
BUT YOU CAN BENEFIT ALREADY TODAY BY IMPROVING YOUR HEALTH CONDITION
FROM THE COMFORT OF YOUR HOME
​BY USING OUR HEALTH MAINTENANCE PRODUCTS.

ARISTOLOFT, and its partners are exploring Cellular Therapy and a Philosophy of Holistic Healthcare and Wellness in a revolutionary concept, which leapfrogs wellness and health right into the future.
We are partner of international organizations, providing patients with qualified holistic and cellular treatment to support their unmet medical need. Procedures we are suggesting in this website are investigational, and based on electromagnetic pulsed therapy, combined with low level laser therapy and the regeneration of cellular structure with mesenchymal stem cells based on protocols from Institutional Reviewing Boards (IRB) and / or Ethical committees in countries where such a treatment is permitted.

Stem cell therapies are in general not approved in Western Countries, except, they are based on supportive clinical trials and the relevant FDA / EMA approval.

In July, 2022, the USA registered 1121 clinical trials with mesenchymal stem cells alone, (https://www.clinicaltrials.gov), but only very few products had been so far approved and patented, and even if, often with price tags, making it very difficult to be supported by insurance and healthcare organizations.

Over the last decade, only 15 advanced therapy medicinal products (ATMPs) – that refers to, stem cell and gene therapies – have received approval in Europe. With four withdrawals, only 11 of them still have a valid marketing authorization. That is a stark contrast with the fact that there have been over 500 clinical trials using ATMPs in the EU alone, since 2009. ATMS are according to EMA all those new medicinal products based on stem cell and gene therapy.

The drug, Glybera, as an example, was the most expensive prescription medication in history at $1 million for a one-time round of injections and was withdrawn by the manufacture due to a commercial flop.

Strimvelis, is treating an ultra-rare immune deficiency, has a list price of 594,000 Euros, making it one of the most expensive drugs available, and had been sold so far only a few times, becoming also not a viable product in respect of commercialization, as drugs deriving by this clinical pathway as evidence based medicine are designed to be sold as patented remedy to the mass market.

This situation has encouraged stem cell clinics all over the world even further, to help patients with unmet medical needs by using the concept of a medical procedure, and not the complex, and highly manipulated cell therapy approved drug pathway, which is mandatory for all kind of drugs, including own stem cells, according to the industry and regulatory authorities.

Several countries in the world have, in recent years, provided new legislation which allows cellular therapy with mesenchymal stem cells as a medical procedure, where the patient, and the doctor performing the procedure are signing an informed consent, allowing a patient funded therapy. Such a therapy usually costs between 6.000 and 25.000 USD, and appears not only more affordable but also safe with anecdotal success statements.

Millions of treatments had been performed on this basis all over the world including the USA, and Europe, although the regulatory agencies, like the FDA and EMA are developing new regulations to try stopping such medical procedures in favour of patented drugs. Only a few cases with serious side effects (AE), because of a medical doctor´s procedures, are known and blown out of proportion by the industry and regulatory authorities to stop this easy medical and economic viable alternative to improve quality of life.

Comparing this with the official government statistics of serious side effects, recorded as adverse event (AE) reaching more than hundred thousand death per year with approved medical drugs, this attempt to stop a medical procedure with stem cells as an example, appears somehow not justified even from a safety point of view. Besides this, pharmaceutical drugs are industrialized produced products for the mass market, with the potential risk that individual cases are harmed, whereas the medical procedure is a singular event, performed by a doctor, with a written consent of the patient, being a one-time personalized medical activity to improve quality of life in a singular case.

An adverse event (AE) is defined as an injury caused by an approved pharmaceutical drug and is representing the 4th leading cause of death in the USA, after heart disease, cancer and stroke, but well ahead of diabetes, pulmonary diseases and AIDS.
Source: https://www.nature.com/articles/s41598-019-56525-5 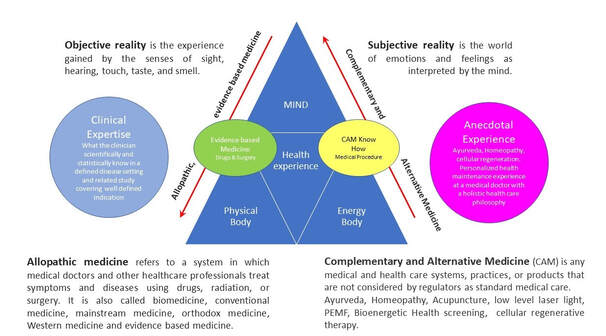 Health begins in the cell, each cell has a pH value, a voltage, a frequency and information carying genes. Each gene contains instructions that tell the cells to make proteins. Proteins perform all sorts of different tasks in a cell, such as making eye pigments, powering muscles, or attacking invading bacteria.

I believe, that to be healthy, energetic, and vibrant, the best approach is to work with our body and give it the elements of health it needs, and if an extra boost is needed, use an approach that catalysis the body]s ability to heal itself. While evidenced based standard medicine is looking at the body as a physical machine and tries to eliminate single symptoms of this machine, new medical insight confirms the thousands of year-old philosophy, that human beings are energy beings, and can be influenced by the energy flow (Chi) in the body conducted by the mind.
Our concept is to help clients to improve the quality of life when treated  with new science-based technologies, where we intent to activate the cellular structure to help the natural regeneration capability of a body to repair damaged cells and tissues, which is reduced during the years of life, resulting in complicated medical conditions and aging. This includes a holistic review of the body and mind before providing any therapy. These Therapies are based on modern typed analysis with advanced bioenergetic health screeing to try to find the root cause of a disease and can include as therapy, electromagnetic pulsed frequency sessions, low level laser light sessions, modern cell separation Apheresis technology and or cellular technology with Telomere increasing concepts, PRP and Mesenchymal stem cells treatments. Again, our treatment suggestion with Mesenchymal stem cell, also in case of antiaging effects, is provided only in countries where such procedures are legally approved.

Science in recent years, has understood that stem cells are regularly produced in our body, and are used for repair and maintenance of its cellular structure and its function. Today, we furthermore, know that the human cellular structure is renewed more or less every seven years completely, resulting that with age the quantity and quality of stem cells produced in a body is reduced, a simple fact of depleting raw materials within our body's regeneration concept.

​By injecting new, potent Mesenchymal Stem Cells, the loss of own stem cells, used for repair and maintenance of the cellular structure over time, is in a way compensating this loss, as the existing stem cell population in a body receive a boost. Symptoms become less noticeable and often even disappear due to the improved regenerative capability of the additional potent stem cells.
In the frame of wellness and health, we also cooperate with a newly established and developing pedagogic animal farm nearby Lisbon, Portugal where we organize the holistic review of clients, and furthermore, will provide the wellness related activity of energy medicine and meditation in a small touristic complex at a hill overlooking the countryside to support the harmony of body and mind to rebuild your health. Below the conceptional view of the intelligent Wellness Lounge.

WELLNESS & ANTIAGING is an important part of our holistic treatment concept.  We are treating the human body as a whole, with 21st Century cellular therapy to regenerate Mind & Body, using Naturopathy technologies, meditation and advanced technological equipment embracing integrative and cellular medicine philosophies. This concept includes a number of wellness related products from our partner Jeunesse. Products, including telomere enhancing supplements are available at our page of Products.
"Health isn’t everything, but without health, everything is nothing!"
Arthur Schopenhauer
(1788-1860),
German Philosopher
I believe that to be healthy, energetic, and vibrant, the best approach is to work with our body and give it the elements of health it needs, and if an extra boost is needed, use an approach that catalysis the body´s natural ability to heal itself.
During my life, I have always endeavoured to learn new things and be open to challenges, resulting that I have increased my knowledge over time in CAM therapies with various Diploma in Meditation, Naturopathy and Stem cell Therapy, which helped me to be a qualified partner to those looking for alternatives to improve their quality of Life.
One of these new frontiers is a qualified medical tourism, and our primary concern is to make alternative new and investigational therapy meaningful as a part of the new disruptive and health benefiting technology.
Aristoloft
Join our revolutionary concept, which leapfrogs your wellness and health right into the future.
Our service to international clients is providing a complete new wellness and anti-aging experience at clinic partners, highly specialist with modern facilities, where patients can stay during the whole treatment period in the clinic or opt to make only a few hours lasting daily treatment in the clinic, while enjoying a comfortable stay at a hotel nearby. Besides organizing a quality treatment we of course also support the stay in such countries which includes picking them up from and bringing them back to the airport, organize the hotel with specific SPA packages, and the daily activity at the clinic, making their stay as comfortable as possible.